Skip to content
Home » Blog » I’m worth it…and so are you!

There is a fine line between what we believe to be worth our time and what seems futile.

Been there, done that. I figured since it didn’t work before, no sense in trying again.

There is often a flurry of activity to prepare for a new year. Cleaning house, finishing off tasks (I’m currently all over this) and setting up plans in an attempt to ensure that we get more done in the coming year. For example, I’m still going after those same pounds that I was this year. They’re still around and they now have friends!

It would be tempting to say, ‘Forget it,’ and just take solace in my new size. However, there’s a “why” behind that weight loss that won’t let me quit. Even when I hit the drive-thru of a fast food restaurant and remember my commitment only when finishing my fries, I still get back on the wagon. I finally learned something this year that I believe will make my future efforts more fruitful.

Just after mid-year and hitting a significant writing deadline, I began to get antsy about my weight. I strongly considered squeezing in workouts and changing my writing days. Thankfully, I remembered something my Pastor says, Keep the main thing the main thing. I was dangerously close to abandoning a new, productive writing habit that I’d been tweaking and developing all year in order to sabotage it with a shot-in-the-dark attempt at losing weight again. But, how could I keep the main thing in focus in light of my growing waistline?

I had to buckle down. Accept AND celebrate what I accomplished by adding a new habit. And I had to put off getting going on something else that I wanted to do as much as writing. Most of all, I had to acknowledge that I wasn’t ready to move forward with another habit. Especially one that had beaten me so many times before. So, I decided to put aside my aesthetic pride and solidify my writing habit, following through on goals that already had my focus and momentum.

Now, as I prepare for the coming year, I have a practice under my belt that can propel me toward other goals. I’m not afraid to fail. I choose to fear that one day I’ll run out of goals to pursue! More often than not, I’ll finish what I start because I’m worth it. And so are you.

Hoping this picture of a more “fit” me inspires us both. 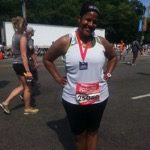 One thought on “I’m worth it…and so are you!”