Ever been asked to bring a dish to a dinner party?

That’s not necessarily the day you want to get creative. With your reputation on the line, debuting a new dish isn’t the best idea.

A couple months ago, a family friend asked that I bring a cake to dinner. A cake I’d only made one other time. They assured me there was no pressure, so I agreed. Since I desired my cake to be fresh, I waited until the night before to bake it. I followed all of the directions just as before. Except one. In my attempt at being “extra” careful, I let it cool in the pan longer than when I baked it a month prior during the holidays.

During that first baking adventure, I made a mental note of improvements I wanted to make on the next try. One of the upgrades was to have a more ‘perfectly formed’ cake by getting it out of the pan intact. My intentions were good. My methods, not so much.

See, I’m not a baker. Any changes to enhance my cake should’ve been guided by, you guessed it, a baker. Instead, I did what seemed to make sense: ‘Leave it in the pan longer and let it cool fully before dumping it onto the cake plate.’ (Don’t be fooled. I’m exactly the type of non-baker who’d say she “dumped” something onto the cake plate.)

Intuition works best in areas where we have at least foundational wisdom. Because I lacked wisdom in this area, my intuition was supremely wrong. When I turned that cake pan over, half the cake came out. It’s worse than you’re imagining. See below for proof. 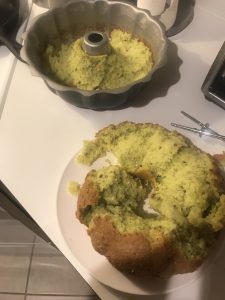 And it was after 10 pm a Saturday night. The night before I need to bring the cake to someone’s home for an early afternoon dinner.

I had 2 choices: make an excuse, or begin again.

A lesson was in play. I could learn it, or I could choose to hide behind the failure of my prior efforts.

Starting over requires courage. Courage to be vulnerable enough to share our failure and ask for help. However, it’s also one of the most freeing acts we get to undertake. Here are some reasons to be brave in starting over:

The second cake came out of the pan in one piece and was served after dinner the next evening. Thankfully, the guests liked it and enjoyed hearing the story behind the two cakes, including my lesson in humility. What lesson? The one that came after I sent the photo above to my husband and explained what I’d done.

His response: ‘Leaving it in there longer probably made it swell as it cooled, which made it harder to get out.’ Almost exactly what Google said. Well, isn’t he just a culinary genius?!

Rather than take out my frustrations on him, I swallowed my pride. ‘Can you just bring me the replacement ingredients, Sir, so I can begin again?’

The finished product is below! 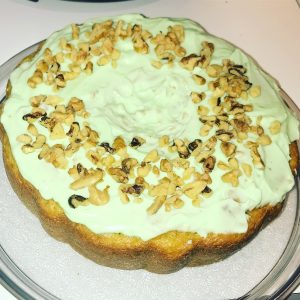 2 thoughts on “Be Brave Enough to BEGIN AGAIN”